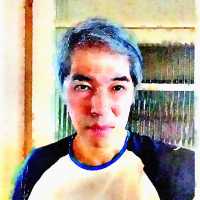 Getting into fashion design. “My first job was as graphic designer in a sportswear industry. Then I graduated (city of Maring? – PR) in engineering and worked in that field for about seven years (city of Sorocaba – SP). Simultaneousl to college I did many courses and exhibitions in Arts — drawing and painting. I decided to move to Sao Paulo, where I worked as broker, and then back to apparel.”

Why back to apparel? “Maybe DNA. Grandma was patternmaking teacher in Japan. Mom used to be a seamstress. Dad was a mechanic. So here they are — the passion for clothing, computer, sewing, machines, drawing, patternmaking and Moulage (Draping).”

In Sao Paulo Kume attended courses in Moulage and sewing. “Then jobs began to pop up,” he said. “Fashion companies, fashion designers and costume designers and researchers became clients.”

Kume been around Brazil as instructor. “I worked for IED – Istituto Europeo di Design for 7 seven years. I was invited to teach illustration, by them, in the cities: Recife – PE, Brasilia -DF.”

Keen on keeping his education an “important role and duty”, Kume received in 2015 his Masters in Science degree in Textile and Fashion from the University of Sao Paulo (School of Arts, Sciences and Humanities).

Integrated into Kume’s teaching and design are various uses of PatternMaker. “My first use was in the sewing classes. PatternMaker and grading are very helpfull. Today I send the patterns printed and cut to companies, all generated by PatternMaker.”

PatternMaker has become a part of his production cycle. “Moulage is the first step; it generates all the shapes. Then the digital process — refining, checking, finishing, and printing is done using PatternMaker. Then the prints are sent to the clients.”

Kume notes that “Physical space for patterns and materials is a luxury. Materials in storage can be lost or damaged. It seems clever having digital files and backups in a cloud. Corrections and alterations are done using the file. One does not need to have the original pattern back from the client.”

Looking to the future, Kume “would love to have now is a photo capturing system, from draping pattern to PatternMaker digital pattern.”