Going Deep into Design and PatternMaker in The Netherlands 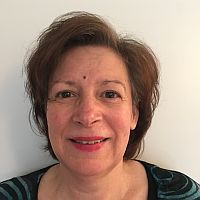 Eugenie Naber — seamstress and tailor — has had a long affair with sewing and PatterMaker. Now 57 in 2016, she lives in Woerden, The Netherlands.

“I had a mam who used to sew everything for us and herself. I did not sew at that time but worked on all other crafts like knitting, crotching, embroidery etc.”

When Eugenie reached 18, however, she got hooked. “I borrowed an old Singer hand sewing machine from my neighbour and was hooked immediately. From that time on all my free time was spent on sewing.”

In 1985 Eugenie began attending a private Dutch sewing education school, Cuppens-Geurs. In 1987 she graduated as Seamstress and in 1990 as Tailor. This education brought together the hands-on sewing machine work with the more intellectual pattern drafting.

“After that I switched in 1996 to a different drafting system with the PMON. (stichting particulier modevak onderwijs nederland = non profit private fashion education the netherlands).”

“In the mean time I married, had three children and still went to sewing school in the evenings. I sew almost all clothes for my children. They always fit and the fabrics are so nice to sew.”

“When I went to school in the end of the nineties the computer was coming up and I was always looking for programs to draft the patterns with instead of doing it by hand. We had to draw over and over the same again. This should and could be much faster with the computer.”

On the computer Eugenie started with Windows Draw, using a method somebody had invented to draw patterns. But, it was not possible to draw real distances, so the program was of limited use.

Then, “I came across PatternMaker and was hooked immediately. I bought version 4 at that time and was very eager to learn it. This was just in the beginning time of electronic mail. Thea, the dealer in the Netherlands, got many emails and questions from me about the program. But I really liked it and I learned to use it very well.”

By 2001 Eugenie had begun to work part-time for a Dutch dealer of PatternMaker, Apparel Systems. She gave demonstrations, shows, and workshops. In this capacity she also made new education material for the PMON with PatternMaker.

“In 2006 I took over activities of Apparel System and became a dealer of PatternMaker software in Europe. I started a new company: Pattern Made 4 You”. Her corresponding website, Patternmade4you.com, is in Dutch, German and English. Spanish will be added.

From about 2004 Eugenie has been involved in development of PatternMaker and MacroGen softwares.

“Because of my experience with pattern drafting by hand I could implement many new tools for PatternMaker which a tailor needs to have in the program.”

Eugenie still sews clothes for herself and her mother, which gives her yet another way to test results from the software.

“At the moment I’m working on a wedding dress for my daughter. But we never have the time to sew everything we want to.”

Despite her passion for sewing and pattern making, it has not spread to her three children — at least not in a big way. “Although, my youngest son made a blanket, drawn with PatternMaker and sewn by himself.”

I draw all my patterns with PatternMaker and MacroGen. I have made macros for a bodice, blouse, t-shirt. When I want to make a pattern I start with a macro and make the changes to the model in MacroGen or do it in PatternMaker after I run the macro. I never draw by hand anymore.”

Even though Eugenie likes sewing, her focus now is creating and selling (MacroGen) macros. “I want to sell my own macros, I am not selling sewn clothes.”

For training others in sewing and PatternMaker, Eugenie says “I made new lesson material with PatternMaker for the books. Also I gave lessons with a beamer and my laptop where I show pattern making to the students.”

Getting people interested in pattern drafting with computers has been a challenge. “After I started working for the Dutch dealer it took a long while to get tailors and also my colleagues interested in a computer drawing program. They like to do it by hand and do not want to change. Now it is changing with new sewers accustomed to the computer.”